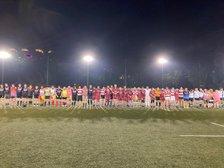 Nags Cross the Line for a Winner in Vets Shambles

Explosive. Flatulent. Spirited. Puzzling. This game had it all.

Round two of the Vets League (40+) was played on a balmy Friday night at King’s Park. Excitement was in the air as men staggered up the hill in full office attire.

Following the opening round biff against HKFC, a few more senior gents had been attracted to the Valley Knackered Nags and to the concept of no-holds-barred fun at the end of a working week and the numbers swelled to 23. The term rolling subs clearly meant different things to different players, ranging from Boozer’s seven interchanges and Weasels stubborn determination to play all 60 minutes and repeat his blistering efforts from the opening round.

Full credit to Boozer for playing wing, lock and flanker – sometimes all in the same movement – and his open confession that he didn’t have a clue what to do in scrums and lineouts.

Also in the 50+ bracket was Colon Olse-copy, shoring up the second row with Mr Chairman, Brett Stewien, who looked healthy after half a year off the turps – unlike Harry SPotter who was reeling from a “very long lunch” after a massive 40th birthday celebration the night before. Operating on fumes, SPotter managed to appear in the next match for the Piggies – as did several other Nags.

The rabble was this month skippered by Juddy, who lead the team around the park – literally round and round the park – and beamed with pride in the after-match super-spreader huddle, offering that “this effort tonight was a f##king mess and we didn’t deserve to win – but we did … and well done lads. Let’s get juiced”.

Once again, there was no loss of love between the two sides who, after a vigorous warm up consisting of a few attempted toe touches and some chucking around of a ball, ripped into each other as though the clock had been wound back 20 years.

The Nags dominated the opening quarter of the game and applied massive pressure in the Loon 22 but the defence was stern. Eventually though after some pounding through the forwards, JJ was able to dart a quick ball to Juddy, on a narrow blind, who palmed it onto Boozer who swooped in at the corner, bringing it around closer to the posts so that Juddy could still miss the kick. 5-0.

At the break, David Ashton David, pledged his allegiance to absolutely destroying himself for the “W” and he wasn’t joshing. The man threw himself at everything, as did Moon Dog, Big Dyl , Hamo the FC deserter and the “Brown and Yellow Bench” – a Rosh-inspired, self-coined slur applied at the bequest of middle-aged, privileged white supremist accountant, The Weasel.

Loon eventually scored through their rampant red-headed flanker who frightened even John The Bruce during the Men-in-Maroon pre-match hype with his offering of “let’s kill these f**king Valley f**kers”.
**complete locker room hearsay but exactly the sort of Braveheart rallying cry that is expected in the Vets League, where brash grunts paper over the body’s under-performing humiliation. 7-5 to Kowloon.

It looked increasingly like the Nags would be downed once again but through patience, determination and a dogged unwillingness to lie down and have a nap, super-subs Ben and Felix saved the day. Ben, tore down the far wing twice with tackle-busting bursts and in the final act of the game, Felix gashing from 20 metres, defeated three tacklers and dotted down in the corner for a celebrated 10-7 win for the Nags.

A minutes silence was then observed by all six teams, in honour of Footy Club player Graham Hedley who sadly passed in the weeks after our opening match against HKFC in round 1.

All that was left was the court sessions. Boozer was rightly fined by both Kowloon and Valley for his ridiculously sloppy hit on the counter-attacking Loon fullback. In his ill-considered defence, he claimed that a) he saved a certain match-winning Kowloon try b) he did send himself from the field after the ref had merely suggested that he owed the victim a beer after the match c) claiming he was “scared and panicked”. This is not the sort of behaviour expected of a club official and role model for kids globally and surely the Chairman will ask for his resignation on Monday. Stay tuned.

Join us for round three on 11th December as the heroic and shambolic Nags take on the Piggies at 8:30pm in an explosive and exclusive farmyard stoush.