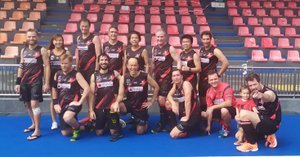 Total FIRED UP, top of the league with unbeaten start maintained

A cooler 9am Kings Park start was a welcome relief from the previous weeks 11am pushback at the 35°C Footie Club.
Great attitude right from the start with all arriving well ahead of the agreed 30 min cut off rule of being ready for the team warm up, drills and team talk. Coach Sarah’s message was clear, 3Q press, man mark at the back, control midfield and hold on to the ball up front and look for outcomes. Captain G’s simple request was to continue with intensity from last Q at HKFC and 100% effort right from the start, win every 50/50 and chase back if dispossessed.

Damage took that to heart and were rewarded early 1Q with a short corner that G converted from the rebound from Mudge’s strike with a flick to the top right corner. Boom 1-0.

From that moment, Damage did not look like giving up the lead and through some excellent strong running and passing, Pole Dancer (George) drove down from the left and sent a pass into the D that Mudge first timed through the keeper’s leg, 2-0.

Damage not happy to settle continued with the intensity. An interception by Pole well in the Damage half followed by a perfect pass cutting through their defense releasing Dangerous Dave on a 1on1 against their keeper. If Damage ever had a penalty shootout, DD will be first up as he ran into the D and coolly slotted it through the keeper’s leg to make it 3-0.

Water break, Coach Sarah instruction was WE WANT MORE and let’s go full press and choke them of any time and go full court press.
KCC definitely felt that and were rushed but as Damage were also adjusting to the new full press, some mix up opened up some space that KCC managed to knock a ball through from the left into the D (thigh high but no excuse) that was not dealt with by the Damage Center Back (no names mentioned ….. me) allowing their center forward time to control and score as Blue Girl (Gee) was caught napping as he was still busy admiring his brand-new kit so wasn’t ready or expecting a shot. 3-1 half time.

Half time message was much the same, get out there, choke KCC of any time to play a passing game and continue with the full press. Happy to report the choke was effective and KCC never had much on and any attempted passes into our D again were dealt with by the defense.

Our 4th goal came early in the 2H as another fine run by Pole in the middle of the field was followed by Mudge collecting the pass and dancing through their defense (he must have dribbled through all 10 of the opposition) before rounding the keeper and slotting in from a tight corner into an open goal.

While we didn’t score another after that and probably tired towards the final Q, the full press was executed perfectly throughout the 2H right up to the final whistle.

Excellent effect and running by everyone! Ice Baby (Mike) did manage a green (rather lucky only a green) during the 2H on a hack/chop that was nowhere remotely near to connecting with the ball but totally took their player out (def a fine there).
I believe that is our first and hopefully last card for the season.

Finally, a HUGE cheer to new Damage mascot Vulture “the Mullet” for his support and for surprising us by still being able to grow a head full of hair then fulfilling his life time ambition of wearing a mullet to raise money for the education fund for Super Faya`s son Jamie.
Well done Vulture and Damage for money raised!! 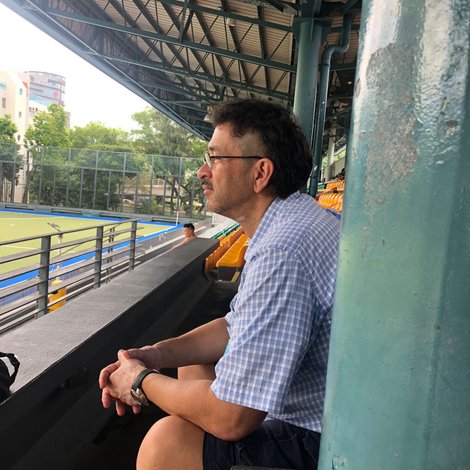 Player of the match