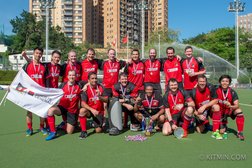 Carnage held to thrilling draw against Cricket Club after Doug grabbed his chance.

The day started under favourable auspices with a full team on time, focused and determined to bring home the first points of the season.

After a very strong start from Carnage, Cricket Club scores against the course of the game on a simple and efficient corner.

Defence line, leaded by a conqueror Pat Perry sporting a yellow Hachimaki was strong and relentless.

A well organized and very committed mid field line was very generous in running and passing allowing the team to manage the best transitions of the season from the back to front line.

Cricket Club playing half court had a strong and dense defence line giving just a few little spaces to our attacking line to play.
All those efforts didn’t prevented a lot of incursions from a dangerous Chris on the side line harassing their flank.
And only a few minutes after the most beautiful occasion of the day leaded by Greg; Doug scored and relieved the team on a ‘’Hockey school’’ action coming from the side, properly passed to penalty spot and strongly received and deflected to the goal.

Last minutes of the game were very intense with Carnage tirelessly building waves of attacks.
Cricket Club suffered a lot and could crack at any time.

Game ended up on a good draw, front of a friendly and committed side allowing carnage to bring the first point of the season.

No cards, no backchat, and a lot of work on and outside the field let predict a good dynamic for Carnage.