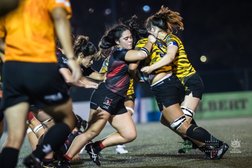 Valley Women's Top the Log With Gritty Victory Over Tigers

Just a single point secures the win against heavyweight contenders

"In the Dettol Women’s Premiership, Valley Black Ladies edged out Tigers Ladies 15-14 in an even more tense top-of-the-table encounter in King’s Park.

Valley’s Andrea Leung Wing-yan scored a significant opener as coach Bella Milo’s side took an early 10-0 lead. Tigers were back in the game near half-time as Hui Man-ling and Au Yeung Sin-yi crossed, both converted by Charlotte Myrans.

Valley started the second half with intensity, with full-back Tse Wing-ku scoring from a cross-field kick picked out by fly-half Wong Yi-tung. With one point in it, Valley held on defensively for the win in what was one of the most high-level matchups of the season so far.

Player-coach Milo was glad to continue their winning streak, with her players showing further improvement as the likes of stand-out number eight Olivia Coady grow in confidence with each game.

“We knew it would be tough. They can score from anywhere so we had to keep it tight, apply pressure and play rugby in the right places,” she said. “We just had to hold on to the ball in the second half. We lost shape at the end from fatigue. The last 10 minutes we were asking the ref ‘how long, how long?’. It’s awesome to close out a game like that. It was the third game in row we had to gut out and credit to the team, especially the bench, that we pulled it out. It wasn’t pretty but we’ll take it.”

Tigers coach Fan Shun-kei remained optimistic despite the narrow loss to one of the league’s top contenders this campaign.

“It was a good loss for us, if there is such a thing. We played about 10 minutes of good rugby, and gave them too many opportunities. We were close, but we need to work on our mental game and our finishing,” he said.

“There were a lot of decision-making errors, so the girls have to study and improve their game sense. Losing will help us build another level. The girls know why they lost, which is key.”