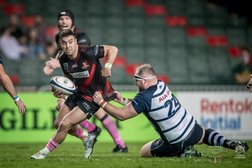 Improving Valley Pipped at the Hooter in Stadium Showdown

"Natixis HKFC and Societe Generale Valley’s men’s and women’s HKRU Premiership teams served up a fine afternoon of action in the Stadium Showdown at Hong Kong Stadium on Saturday.

With 2,755 fans packing the lower bowl to watch the day’s action, top-ranked Valley women’s team did not disappoint as they beat Natixis HKFC Ice 25-5, while HKFC’s men’s XV fought back from a 17-3 second-half deficit to win 20-17 with a try in the 78th minute from Callum Hardie.

In the men’s Premiership the HKRU’s oldest rugby rivalry did not disappoint either as Hong Kong’s heavyweights traded blows in a quintessential game of two halves.

Valley dominated the opening half en route to a 14-3 lead, while Football Club stormed back with 17 unanswered second half points for the win.
Valley were rampant from kick-off with their first try coming after only five minutes when flanker Carl Marks finished an attack started up field by a half-break from Whiria Meltzer. Fly half Tom Smith added the conversion to make it 7-0.

Club stayed composed under the early duress and soon battled back up pitch to set up a long-range penalty for Niall Rowark who closed the gap to 7-3 after ten minutes.

That was the last positive movement for HFKC in the first half as Valley went right back to chipping away at the Club defence.

By the time the teams took on water at 20 minutes it was well and truly one-way traffic for Valley, who dominated territory and time of possession thereafter with HFKC lucky to only trail 7-3 at that stage.

Valley pressure finally told after 22 minutes when the pack bulled over for a forwards’ try in the far corner. Smith’s conversion was good as Valley pushed the margin to 14-3.

Club’s best scoring chance came in the final minutes of the first half with a jailbreak attack carrying the ball nearly to ten metres from the Valley line before the final pass went forward, and as the half-time hooter sounded, the defending league champions trailed 14-3.

The signals were reversed in the second half as HKFC came out firing, but when Tom Smith struck his first penalty of the night to bring the score to 17-3 to Valley with 23 minutes remaining it looked like it was over, but from that moment on it was all HKFC as the blue and whites stormed down the homestretch with 17 unanswered points to pip Valley at the post.

Inside the last ten minutes, the HKFC backline conjured up a final drive that saw every ball go to hand for seemingly the first time in the match. Hood again combined well with fullback Ben Smith whose quick hands found Axten-Burrett on an inside ball. Axten-Burrett took a perfectly chosen inside line to draw the defence across before slipping a beautiful offload to Higson-Smith for the score, closing Valley’s margin to four, 17-13, with six minutes left. Hood flubbed the conversion, but club were poised for a miracle comeback.

From the restart Valley bobbled a high searching ball and Axten-Burrett was again well placed to hack it ahead for the kick and chance. The defence could not control and HKFC reclaimed possession and a resulting penalty on the loose play. They took on Valley at its biggest strength, opting for the scrum five metres out from the posts. Club produced the ball at the back but reserve McCormack-Houston was stopped sharply by the defence.

The ball was slow to come from the ruck but Club regained possession and mounted seven phases to the line before Callum Hardie was interred beneath a half dozen Club and Valley forwards across the try line. The long-haired and bearded Hardie emerged from the bottom of the ruck carrying the game-winning ball as Club pushed by Valley 20-17 after the conversion.

“It was a game of two halves,” said a relieved Natixis HKFC coach Jack Wiggins. “We never got in the game in the first half. We made some unforced errors when we got into good areas and never got a foothold in it, and Valley were good in certain areas.

“There is no panic with this team. We can always come back into games and I think it’s a feature for us in this league. We put the first half to bed, but in the second half, our character came through and we snuck it in the end, which is always pleasing.

“Credit to the HKRU, Valley and Football Club that we managed to get this on. It has been a great day from start to finish and a great showcase for rugby in Hong Kong. Tonight is about as normal as it has felt in 18 months and we are so grateful to be here,” he added.