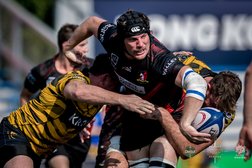 Kroll USRC Tigers dug deep in their 29-20 win over Societe Generale Valley in round four of the Dettol Men’s Premiership on Saturday – losing key prop Jack Parfitt, who sustained a serious-looking injury, and two players picking up yellow cards.

Tigers hooker Matt Keay set the tempo with an early try at a sizzling King’s Park. Fly-half Joshua Henderson soon added a penalty to his earlier conversion in what was a magical display from the Hong Kong-eligible Scotsman.

Valley, who were expected to build on a win in round two, struggled beyond their big tackles and strong scrums, going down 0-13 in the first 20 minutes. But a well-worked try from full-back Whiria Meltzer kept them in touching distance.

Tigers’ super start looked to be crumbling as Parfitt, who joined in the off-season after a stint with London Scottish, required lengthy medical attention following an awkward scrum. Parfitt was eventually taken away in an ambulance with a suspected neck issue, putting the Tigers front pack in danger.

With their props on yellow cards, one leading to a penalty try, and Keay off injured, Valley took advantage and clawed their way back to get within two points at half-time.

The tide had turned after the lengthy stoppage time, with Valley’s Domenico Hegglin powering through for a try thanks to Luke Dewar and Nyasha Tarusenga’s bulldozing.

But Tigers’ Henderson kicked two important penalties to bring the score to 20-19 and set up a tense last quarter. Minutes later, Henderson had a moment of genius, intercepting a loose pass and carrying the ball for captain Lawrence Miller to score the deciding try.

“I’m pleased and I’m proud,” said new coach Lewis Evans, confirming that Parfitt was “compos mentis” before being rushed to hospital. “The boys showed outstanding resilience, especially with what happened to Jack. I know it’s not pleasant to see that and he is a massive factor in our team.

“To lose him early certainly changed our plans, but the boys responded really well and that’s what I wanted to see after last week [when they were beaten by Kowloon]. Today wasn’t pretty, but the boys stuck to the plan and we came through it in the end.

“[Henderson] is such a quality player. I know he’s going for that 10 jersey for the national team as well, so a couple of consistent performances and he’ll be in amongst it fighting for the jersey.”

Valley coach Mark Fatialofa was far from pleased with his team’s performance.

“We’ve got to look at ourselves. We were handed numerous advantages and we just never seemed to jump on it. They went down to 13 men and we kept throwing away opportunities to put them under pressure. Well the played to [Tigers]; they stuck in the fight and they played the game how it’s meant to be played,” he said.

“I still can’t get my head around it, so many pieces of the puzzle went missing. That was unacceptable from a lot of the players.”
Meanwhile, DAC Kowloon snapped reigning champions Natixis Hong Kong Football Club’s unbeaten run 26-17, while Impact HK HKU Sandy Bay beat KPMG Hong Kong Scottish 20-19.