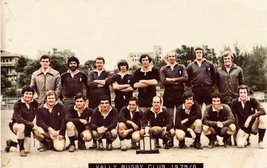 A ‘club’ is defined as an association of two or more people united by a common interest or goal and Valley RFC was no more than that when it was formed on 19 June 1975 at a meeting attended by a group of 16 persons , held at the then China Fleet Club opposite Police Head HQ in Arsenal Street.The ‘common interest or goal’ was ‘To Play Rugby Football’ and the impetus for its formation was that at that time, there was nowhere for that group to go.

In the 1970’s, there were just 3 existing ‘rugby football’ groups, namely, the Hong Kong Football Club; the Royal Hong Kong Police RFC; and the British Forces RFC [Royal Air Force / Royal Navy / British Army] .The YMCA fielded a social rugby side in the early 70’s, catering for civilians who chose not to join the HKFC, but that was it. 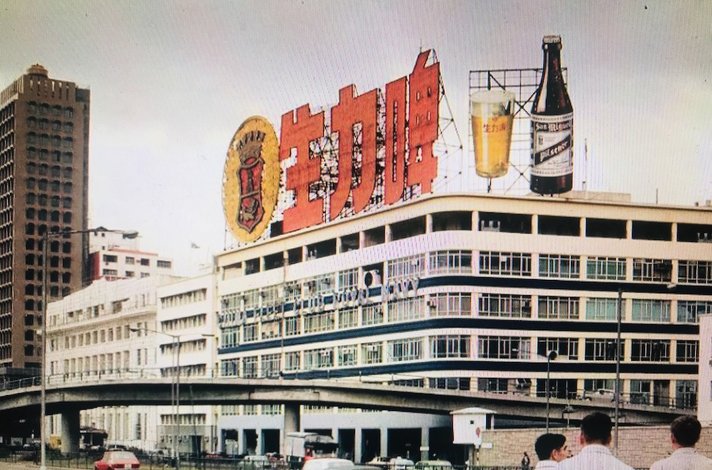 To begin with, the group -8 rugby players and 6 others-had chosen the name "The Exiles RUFC" but later decided on "Valley RFC"

It started from a motion, proposed by Police Superintendent, Mark Pelly, the Captain of the Police Wanderers Rugby Team, at the Police RFC 1974/75 Annual General Meeting and adopted, that “Only those serving with the Police can play for the Police.” 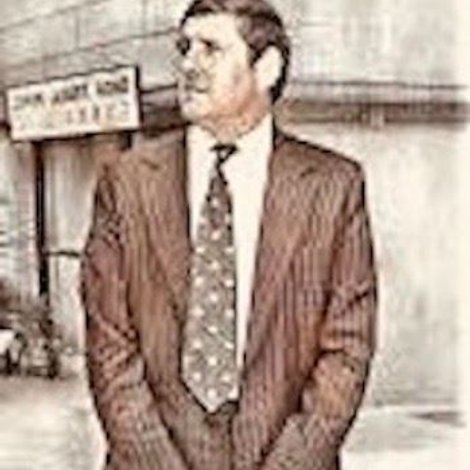 The background to it is that prior to 1974, corruption investigation and prosecution was handled by the Anti Corruption Unit of the Royal HongKong Police. An investigation of Chief Superintendent, Peter Godber, exposed a police force on the take and rotten to the core. 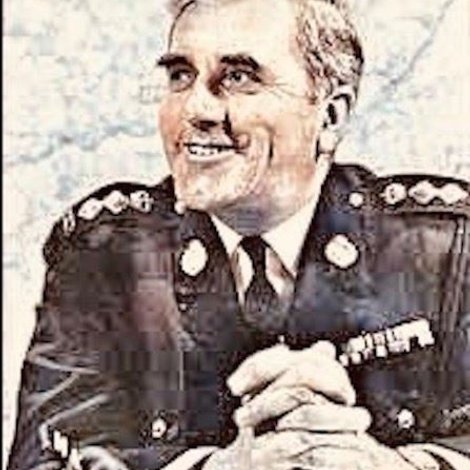 When asked in 1973, to explain his sources of personal wealth far beyond his official government salary, Peter Godber fled HongKong thereby becoming a fugitive from justice.
The ensuing scandal led directly to the formation in 1974, of an Independent Commission Against Corruption [ICAC] outside of the Police-and a social firestorm which included the founding of the Valley Rugby Football Club.

This was so by reason that ICAC personnel were recruited as investigators from -and at higher salaries-primarily from the existing Police Anti Corruption Unit, including rugby players from the Police Rugby teams.

Among those who were so recruited, were a number of Police rugby players, including David Kendall, a team mate of Police team captain, Mark Pelly, whose duties included scrutinising their Police teammates. Not very nice to be probed-and maybe even prosecuted by your own teammate !

This led to Police team captain Mark Pelly’s sponsored motion, being adopted and passed at the 1975 Police RFC AGM - “Only those serving with the Police can play for the Police.”

This left a sizeable group of former Police players with no club to play for. In the 1970’s, there were just 3 existing ‘rugby football’ groups, namely, the Hong Kong Football Club; the Royal Hong Kong Police RFC; and the British Forces RFC [Royal Air Force / Royal Navy / British Army].

The YMCA fielded a social rugby side in the early 70’s, catering for civilians who chose not to join the HKFC, but that was it.

So a meeting was convened at 8.30pm on Thursday 19 June 1975 at the China Fleet Club, together with others from the private sector and the Royal Navy, 14 persons in total. 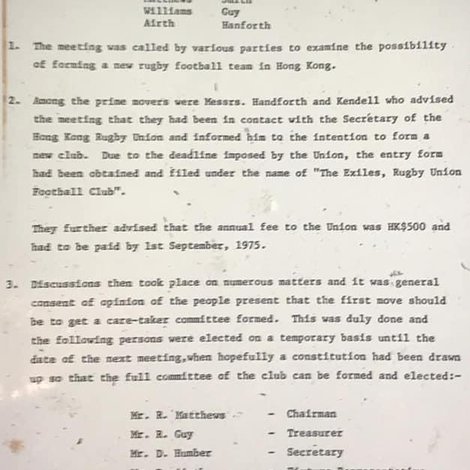 With their exclusion from the Police RFC still raw, the group’s club name of first choice was “The Exiles”. Later, they settled on “Valley RFC” since the Happy Valley pitch was the available training ground at that time.

A ‘Valley Founder’ is anyone-including me- who played for and supported the club through its first season. Only 8 of the 14 who attended the 19 June 1975 were rugby players -barely enough for a 7's team.

By mid 1975-1976 season, less than half the players were ICAC but included bankers, lawyers, school teachers, Government servants, British Forces types as well as serving and former Police officers. 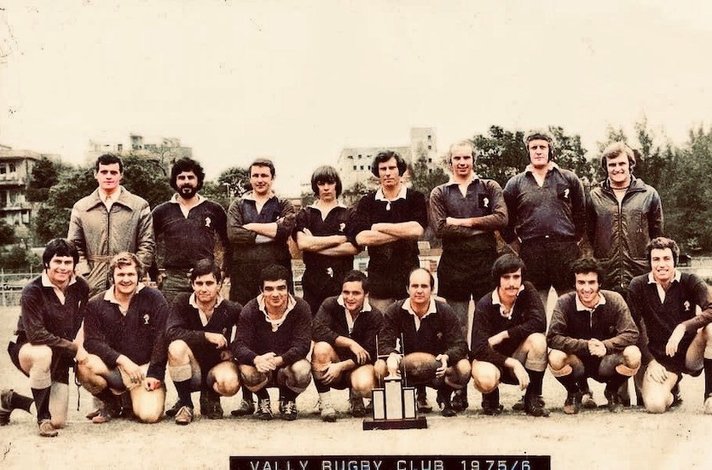 Valley RFC was a close knit social group in that first season and although few games were won, they were awarded the ‘31 Trophy’ by the HK Referees Society, a yearly accolade which goes to the team, that in their opinion has best demonstrated the spirit of The Game Of Rugby Football. 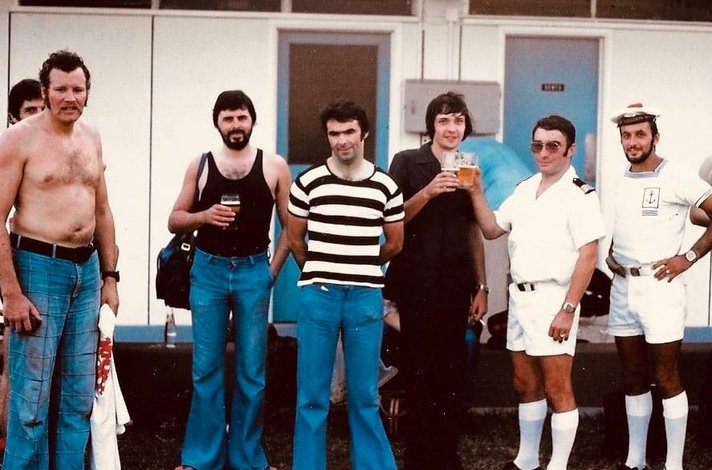 That’s not that saying that the 1975-76 Valley RFC team were totally without flaw. A few of them later went to prison, ending up guests of the then, Her Majesty’s HongKong Colonial Government. And some were Valley team efforts, that is to say, much later down the track- one former team mate was ‘investigated’ by a second former team mate and then prosecuted by a third !

Another got in trouble -celebrating after a rare win against an HKFC side-for riding his motorcycle through the Cross Harbour Tunnel without paying the Toll. That may not sound that bad, but being clocked at speeds of 90+miles an hour, is a different matter.

A particularly memorable one, was a guy who celebrating too much at the Bull & Bear on just being selected to represent the then Colony at the HongKong Sevens, somehow that same evening, got himself arrested on the charge of impersonating a Police Officer. He had to skip a training session for his court appearance. Fortunately for him, the Judge was a rugby fan who basically just said no more than ‘You daft prick !’ entered ‘no conviction’ and ordered him to pay the costs of the prosecution. Another guy was locked up in the Gulf for about a year– and so on and so forth.

Countless others have been on the wrong side of the law since. Having received early morning calls [bailouts, usually from Wanchai Police Station] in Valley's first 25 years, I can confidently say that Valley RFC, have had more players arrested, locked up, charged, prosecuted -even imprisoned- than any other HK rugby club.

Valley RFC’s first season colours were YELLOW and BLACK, since they were the only rugby jersey colours that HongKong's then sole rugby apparel suppliers, K.S. Ahluwalia in Hankow Road,Tsim Sha Tsui, Kowloon, had in stock at that time.

As to be expected, ensuing seasons colours were largely dictated by the colours of whomever was the sponsor. Valley wore GREEN and WHITE HOOPS for a season when sponsored by Swires. 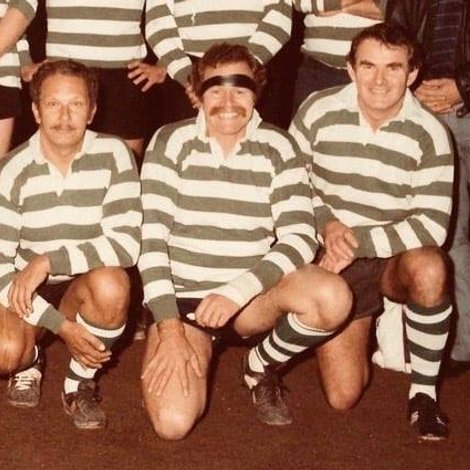 The clubs current RED and BLACK colours first made their appearance in the late 80’s and early 90’s with sponsorship from Kowloon Dairy.

Apart from a 2-3 year period wearing the DHL colours of MAROON and SILVER GREY the Valley colours have remained RED and BLACK for the past three decades at least, most recently French bank, Societe Generale

Valley’s French bank connection dates from Year One; Banque Nationale de Paris [1975] through a couple of players from Banque Indo Suez Asia and other Gallic types from the financial industry. 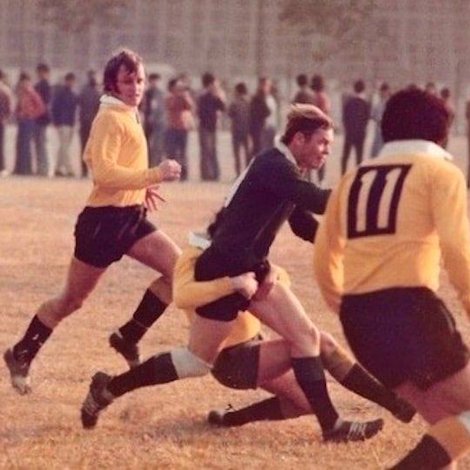 Hordes joined in 1977 for the copious free Kronenbourg beer, Pernod and Gauloises cigarettes, when after a bit of fast talking, Banque Nationale de Paris were persauded to invest the then unprecedented sum of $20,000. In games between Valley and visiting French teams rugby was a secondary matter which only got in the way of a good punch-up.

Admitting women to membership of a then all male body in 1981, was one of the more enlightened decisions Valley RFC ever made.

Well-the decision of then Valley Chairman, John Barrett, when he unilaterally admitted a Womens Hockey Team to what he euphemistically described as ‘social membership’. And that 1981 Womens Hockey Team did really well, finishing 3rd in just their first season. 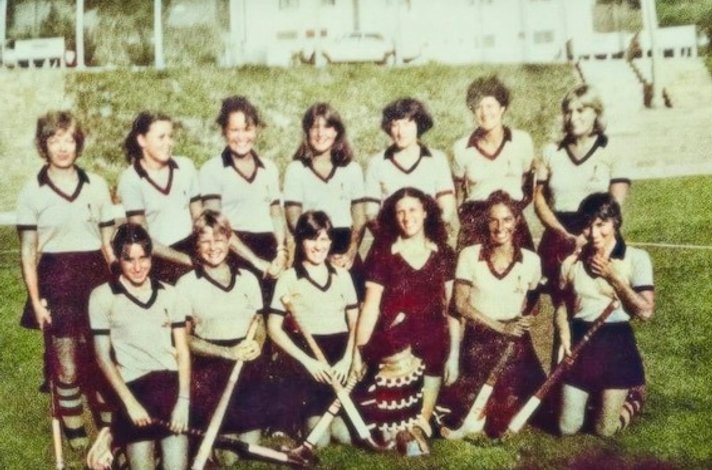 Any ‘no women allowed’ objections fell away by year's end as the ladies took over much of Valley’s administration, organization of socials and the like.

This in turn lead to the formation of the Mens Hockey Section, the Womens Netball Section in 1985. Valley Womens Rugby came later down the track in 1989.

Valley RFC Womens Netball won the Hong Kong Womens Netball League after in 1988. The Valley ‘Player Of The Year’ in 1988 was Jill Astin a -woman-netball player and not a rugby player. 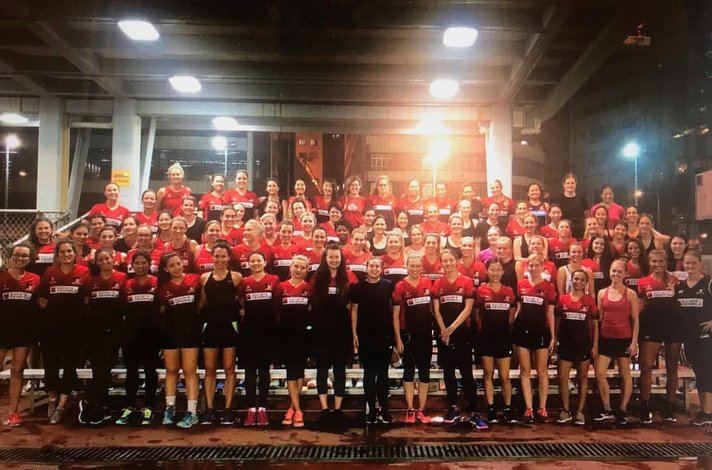 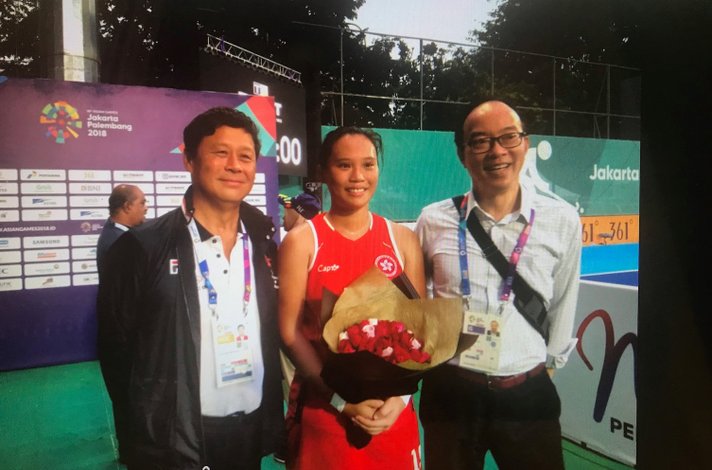 Valley RFC Men did not start to win any "Premiership" type silverware until securing their first Union League and Knockout trophies on Sat 16 Dec 1989, some 14 seasons after the 19 June 1975 founding. 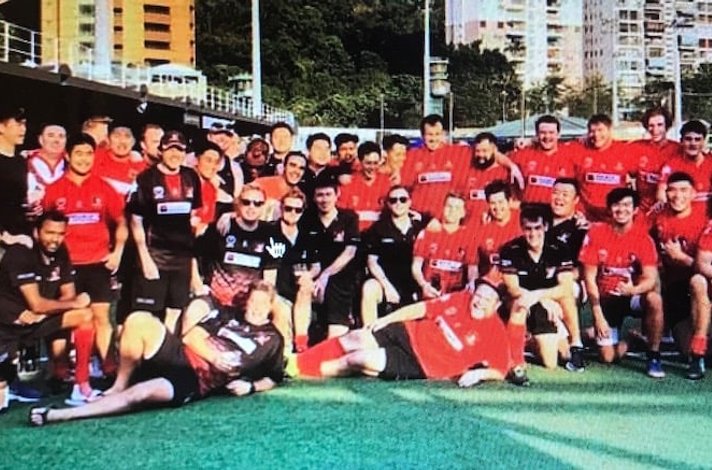 And Valley RFC just grew from there. By 1991, membership had reached 267. Of those, 127 were rugby playing members, 17 were hockey players, and 30 were netball players. Additionally there were 31 student members and 56 social members. 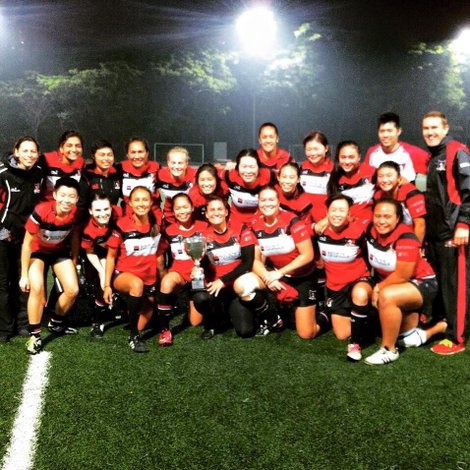 Essentially, Valley RFC was formed by people who care and that is reflected in the history of their charitable work-efforts unmatched by any other social-sports club.

Since the early 90’s, Valley RFC has raised and donated tens of millions of $ dollars-as a conservative estimate about $30 million to date- through its now annual Valley Sevens Long Lunch and Valley Sevens Beer Tent. Indeed, both its Long Lunch and Beer Tent were up and running before either of the Unions versions.

FROM ONE RUGBY TEAM TO THOUSANDS

So 45 years on from that meeting at the China Fleet Club, Valley RFC has evolved from a single rugby team to a multisports club-Rugby/ Hockey/ Netball - men, women, boys and girls - with a membership of thousands. 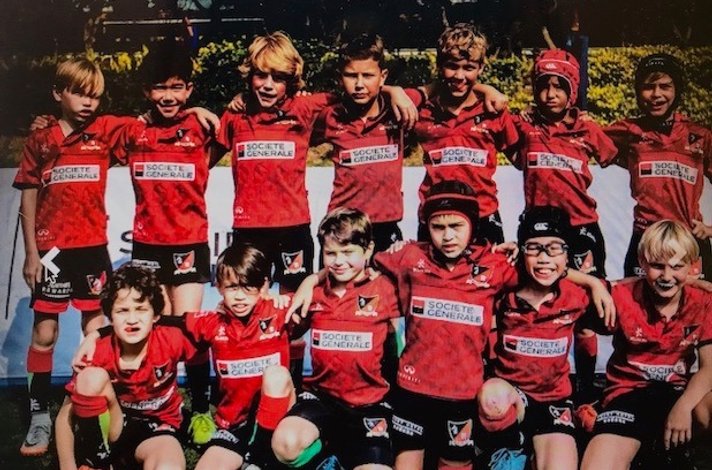 No clubhouse, no facilities and, as with that single 1975 founding rugby team, a group whose only assets are the people themselves.

“What if David Kendall had remained with the Police and had never become an ICAC investigator?”

“What if Mark Pelly had not sponsored that motion?”.

If anyone asks me-’Who was responsible for the founding of Valley RFC?’ my reply usually starts-

“Well once upon a time, there were these two Police rugby team mates, David Kendall and Mark Pelly- - -“ 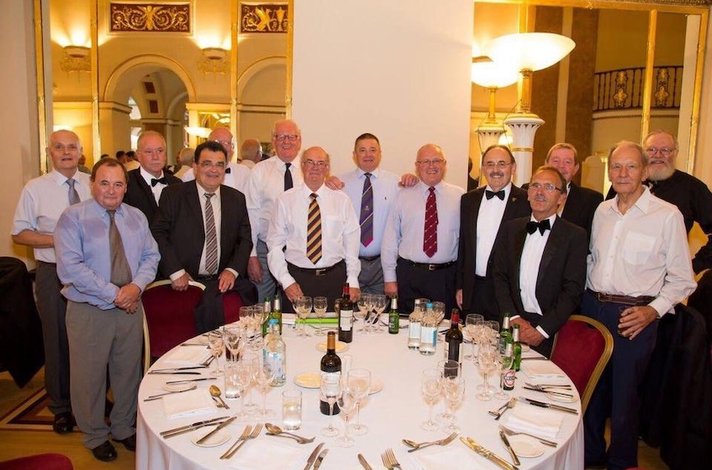